‘Perverting the course of Justice’ effectively means lying to the police or court in a way that seeks to hide the commission of an offence or acting in a way to unlawfully discourage others from carrying out their lawful duty of giving evidence to the court.  Unsurprisingly, this is highly frowned upon in the justice system, and there are often serious consequences of not-so-little ‘white lies’. If someone is caught perverting the course of Justice, there is a very good chance that they will go to prison. Surprisingly, people caught lying, often do not expect these consequences, and believe they can get away with it easily.

“Offences of perverting the course of justice are intrinsically so serious that they will almost always attract an immediate custodial sentence unless there are exceptional circumstances justifying a different course” (R v Cronin (2017)).

When you have a certain number of points your driving licence, if you get anymore, it can result in a driving ban. When this happens, people tend to think it is easier to blame someone else. For example, if they had other people insured on the vehicle, they could put the blame on the other named driver, still believing that they won’t be caught. This is very easy for the police to investigate being found out can have the very serious consequences, in addition to points on your licence and a driving ban, of being sent to prison.

If you would like expert legal advice on road traffic issues, please contact Asim Ali on alia@tuckerssolicitors.com or on 0845 200 3367. 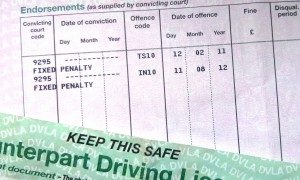