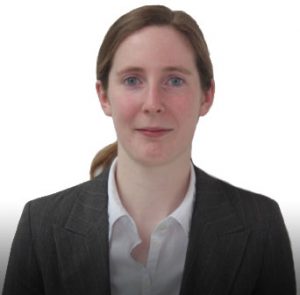 Elaine Macdonald of Tuckers Solicitors worked brilliantly on a recent inquest into the death of Kimberley Smith, who was 33 when she died while a mental health inpatient in Surrey on 13 October 2018. The inquest concluded finding that neglect contributed to her death by suicide.

Elaine Macdonald of Tuckers Solicitors said: “The evidence heard during this inquest highlighted a litany of shocking failures in the care provided to Kimberley at the ACU, including a lack of coherent information being shared between the Trust and Surrey Police at critical times while Kimberley was missing from the ward and should have been considered to be at high risk. Kimberley was badly let down, and lessons need to be learned.”

Kimberley was an inpatient at Anderson Ward, a mental health ward for women at the Abraham Cowley Unit (ACU) in St Peter’s Hospital, Chertsey and operated by the Surrey and Borders Partnership NHS Foundation Trust (SaBP). Despite being at a high risk of self-harm and suicide, Kimberley was able to abscond on multiple occasions and access alcohol and materials for self-harm. She was placed under a short, temporary section that was allowed to lapse.

Kimberley was a bright, kind and generous young woman who had a promising career in fashion. She had struggled with self-harm since her teenage years, and in the three years before her death was diagnosed with mental and behavioural disorders due to alcohol, post-traumatic stress disorder, anorexia nervosa and emotionally unstable personality disorder.

Kimberley was admitted to the unit as an informal patient on 3 October 2018. She had recently been detained by Surrey Police under section 136 of the Mental Health Act 1983 on three occasions between 20 September and 2 October 2018, during a period of rapidly worsening mental health crisis. On two of those occasions Kimberley had made a serious attempt on her own life, after consuming alcohol.

Shortly after admission to the ACU, Kimberley was allowed to leave the ward and went on to consume alcohol. On 5 October 2018, Kimberley left the ward and become so intoxicated that she was taken to A&E by a passer-by. The following day she was detained for 72 hours on the ward (under section 5 of the Mental Health Act) due to concerns that she would leave to drink again.

An independent consultant psychiatrist instructed by the coroner, Dr Michael Isaac, told the inquest jury that, given the high risk of suicide Kimberley presented, at this point she should have been assessed and detained in the ACU under section 2 of the Mental Health Act (allowing up to 28 days of detention for assessment) for her own safety. However, Kimberley’s temporary section was instead allowed to lapse on 9 October without a further Mental Health Act assessment. She then absconded from the ward for a second time on 10 October 2018 and was brought back very intoxicated in the early hours of 11 October in the company of an unknown man.

An instruction was then entered into Kimberley’s medical records that she was to be risk assessed before being allowed to go on any leave. She had also been assessed as high risk of suicide when under the influence of alcohol. Yet the following day (12 October) the level of observations for Kimberley were reduced from every 15 minutes to hourly, with no documented reason as to why. She was allowed to leave the ACU at 3.20pm unescorted – again without any risk assessment taking place.

The two nurses in charge of Anderson Ward that day were both bank nurses who had no understanding of Kimberley’s risks or history. Although Kimberley agreed to be back at the ward by 4.30pm, she did not return – yet no action was taken by the day staff at the ACU. At around 7.30pm that evening the unknown man called nurses to say he was concerned about Kimberley as she was talking about suicide. At around 10.30pm, ACU night shift staff eventually made contact with Kimberley and noted that she was tearful and intoxicated.

Shortly after midnight, the man who was with Kimberley returned her to the ACU. The man walked from the car park towards the ACU to hand Kimberley’s bag, which contained two bottles of spirits, numerous packets of medication, string and razor blades, over to staff. However, Kimberley walked off in the opposite direction. Following this, at 12.10am on 13 October, a nurse reported Kimberley as a missing person to Surrey Police. No Missing Persons ‘pack’ had been completed to enable accurate details to be passed to the police (which staff were obliged to do upon her admission); and the police were told that Kimberley was an ‘amber’ (or moderate) risk.

It was approximately seven hours before Surrey Police deployed an officer to the ACU in response to this call. Kimberley was seen alive by other patients on the ward at around 2pm, but no enquires were made of her peers. At approximately 4.45pm on 13 October, Kimberley’s body was discovered by other patients in a wooded area on the hospital grounds less than 100 yards from the main entrance of the ACU, which was reported to have been an unofficial smoking area for patients and staff.

After six days of evidence and three days’ deliberation the jury concluded that Kimberley’s death was by suicide, the medical cause of which was asphyxia with the jury finding the following factors contributed to her death.

The jury also concluded that the following factors possibly contributed to Kimberley’s death:

The majority of the jury concluded that Kimberley’s death was caused by neglect – that is, gross failures to provide her with basic care.

The Assistant Coroner for Surrey, Anna Crawford, indicated that she would be writing a Prevention on Future Deaths report in relation to her ongoing concerns around leave being granted to patients at the ACU, and the Trust’s policies for reporting missing patients to the police.

The Mental Health Strategic Lead for Surrey Police, Lee Sawkins, described it as “concerning” that no suicide warning markers had been placed on the Police National Computer for Kimberley Smith, given her recent history of involvement with the police and the risks she presented. The Surrey Police suicide prevention force advisor is currently developing a system whereby the force can record risk relating to attempt suicide on local and national police systems.

David Smith, Kimberley’s father, said: “We knew in the weeks leading up to Kimberley’s death that there were increasingly serious issues with Kimberley’s care. We tried to raise these concerns to the best of our ability at the time. On 3 October 2018 we watched our daughter leave for the ACU believing that she would be in a place of safety, optimistic and hopeful for her care and well-being. Ten days later Kimberley took her own life.

We are shocked and angered by the evidence that we heard at Kimberley’s inquest, and feel so desperately saddened and upset that Kimberley, at a time of crisis and need, was placed in this environment and that more urgent action was not taken to keep her safe. The jury’s Neglect conclusion only exacerbates our pain and deep sense of loss. It brings little sense of closure around the tragic circumstances and untimely death of our beautiful daughter, particularly in the knowledge that the concerns we voiced at the time were in fact justified, but were inadequately acted upon – and that Kimberley’s death could and should have been prevented. We miss you Kimberley more than you will ever know, you are forever in our hearts and thoughts.”

Deborah Coles, Director of INQUEST, said: “Kimberley’s experiences, and the ways in which she has been seriously failed and neglected, are reflective of significant issues across the country. There are widespread shortcomings in mental health services providing care for young women, particularly those with multiple diagnoses which are seen as complex, such as personality or eating disorders. In this unit itself, five years ago a coroner warned the Trust that they needed to address the monitoring of those leaving the building, after another patient absconded and died. This recommendation was made to prevent future deaths, but clearly not enough has changed. Locally, SaBP must do more to address their continued failings, and nationally the system must change to ensure potentially lifesaving recommendations are enacted and sustained.”