Reducing a sentence – What can I do?

Saying sorry really can help sometimes – if you mean it.  A genuine expression of remorse can help in reducing a sentence that you might otherwise get.  But it is only ‘genuine remorse’ that is really taken into consideration in sentencing guidelines.  The Oxford English Dictionary defines it as “a feeling of compunction, or of deep regret and repentance for a sin or wrong committed”.

The Sentencing Council commented “Sentencers sitting in court on a daily basis are alive to the ease with which ‘sorry’ can be said but not meant.”  In other words, actions speak louder than words, and simply saying ‘sorry’ is not enough. You must truly show genuine remorse in order for the outcome to be reconsidered.

An example of how not to do it would be the high profile case of Charlie Alliston following his conviction for “wanton and furious driving”. Alliston was cycling roughly 20mph through East London with no front brakes when he killed mother-of-two by riding into her and causing major head injuries.  Following up from the incident, Alliston posted to social media: “It was her fault, but no she did not deserve it. Hopefully it is a lesson to be learned on her behalf”.  He also complained “It’s not my fault people either think they are invincible or have zero respect for cyclists.”

Alliston was found guilty of causing bodily harm by wanton and furious driving. In sentencing, Judge Wendy Joseph described Alliston as “an accident waiting to happen”.  His lack of remorse and custodial sentence received are surely linked to an extent.

There are certain actions which the courts have been prepared to acknowledge as demonstrating genuine remorse.   This include:

There are other examples, however these tend to be commonplace and are less persuasive:

If you are seeking assistance with any criminal matter, including advice on sentencing, please contact our Practice Director, Adam Makepeace at makepeacea@tuckerssolicitors.com or on 020 7388 8333 to be directed to the right person to help. 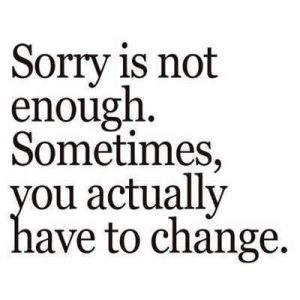