Body Worn Cameras are becoming more popular in police forces across England and Wales, including prison officers. Apparently this new idea is “changing the justice system”. Psychologically, the idea of being filmed can cause people to react differently in certain situations, for example some may not get as angry if they know they are being filmed. If you are wondering what body-worn cameras are, they are similar to a GoPro. They are small video cameras which are usually strapped somewhere across the officer’s chest, allowing the officer to record certain situations.

The Metropolitan police has invested a huge £3.5m into providing the cameras to officers, in the hope that it will reduce the number of complaints about the police and how they behave towards others. Any evidence captured from the cameras can be used as evidence to support a prosecution.

During 2011, research students from Newcastle University posted a picture of male eyes, with the caption: “Cycle Thieves: We’re Watching You”. Bike thefts decreased by 62% in the areas that this picture was put up. If people are aware they are being watched, they are less likely to commit a crime or at least be tempted to.   Although often if people are aware of cameras, they just cover their face so that they cannot be identified! Whereas if someone is committing a crime and they see a security camera, they are more likely to stop what they are doing purely because they are identifiable and did not prepare, (i.e. bring a mask to hide their face etc).

The idea of body-worn cameras in the UK was inspired by a study in America in 2012.  There were many complaints about police officers misconduct, and the government hopes body-worn cameras will reduce the number of complaints. 54 officers took part in the study, which showed a 90% decrease in complaints about police compared to the year before. Another study, where 249 people were interviewed after their recent encounter with an officer wearing a camera, showed that people who were aware of the cameras, thought their treatment was more “just” than those who were not aware of the cameras.

The American study was criticised because 54 officers is really not a big number for something like this. The Washington police department are now conducting an 18-month study with over 2,000 officers.  So far, the results have not been the same as in the initial trial.  There are definitely mixed opinions about the benefits of body-worn cameras. Some arguable benefits of body-worn cameras are: accurate recording of evidence, building trust within the community police and detecting rogue officer behaviour.

Can the footage be used against me?

Regardless of the arguments about the pros and cons of these new body-worn cameras, others think that it breaches their rights to privacy., But are the improvements in reliability of evidence a price worth paying?. The footage can be used as evidence.  It must be analysed carefully, as it can be very easy to fall into the trap of believing the “camera never lies”. Video footage can sometimes be taken way out of context, especially by others not at the scene.  Also, as defence lawyers, we need to make sure that the evidence from body worn video is always disclosed.  In some cases where the evidence might be helpful to the defence, the footage has mysteriously ‘gone missing’.

If you believe that you have been recorded on a Body Worn Camera or would like to discuss any criminal law issues, please contact Nimish Kotecha at kotechan@tuckerssolicitors.com or on 020 7388 8333. 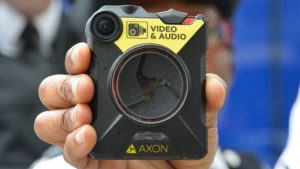