A new two-week gun amnesty has just begun across the UK. People have been given the opportunity to dispose of any firearms and ammunition safely, with no questions asked by the police. It is directed at two distinct groups of people. One group being people who are aware that they are in possession of illegal weapons or ammunition, and the second group being people who might be slightly more innocent and are in possession of an illegal weapon but are too worried to do anything about it. Statistics show that gun crime in the UK has increased by 42% in 2017. The Met Police’s figures showed there was 2,544 gun crime offences from April 2016 – 2017, along with knife crime also increasing by 24% with 12,074 offences recorded. Gun crime is becoming increasingly common, therefore giving people the opportunity to get rid of their weapons without being prosecuted could mean that a large chunk of illegal weapons will be taken off the street, hopefully meaning that these crime statistics will decrease.  Some early reports indicate that some very dangerous weapons, including AK-47 machine guns have already been handed in under the amnesty.

I have a weapon – what should I do and what happens after?

If you are in possession of an illegal weapon, you must ring 101 and make arrangements with the police. The weapon can either be collected or dropped off at an allocated police station. If you don’t wish to disclose any information to the police, you don’t have to. This also means that you will not be prosecuted for handing over the weapon, however police may want to investigate the situation further in case it the weapon has been linked to other criminal offences. If the weapon was used in a criminal offence, further investigation will continue and the amnesty will not prevent the police from pursuing the people for those offences.

If you wish to take advantage of the amnesty, but are slightly worried about criminal liability, please contact us so that we can advise you on this matter. Please contact Adam Makepeace on makepeacea@tuckerssolicitors.com or on 020 7388 8333 to be directed to the correct person to help you. 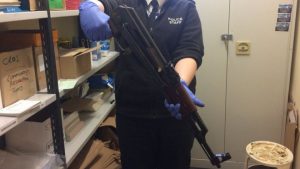