Knife Crime – What are the consequences?

In a recent article about knife crime for the Guardian, statistics show that there were 4,054 hospital admissions for assault with sharp instruments in the year ending March 2016, with a 13% increase in comparison to the previous year, which had 3,590 admissions. A Metropolitan Police report also states that in the last 5 years, the number of children carrying knives in London schools has doubled. The number of knife crimes per year are rapidly rising, especially towards the younger generation. Sarah Jones, Labour MP for Croydon and chair of the all-party parliamentary group on knife crime, said in the Guardian that “every single youth organisation is reporting increasing anxiety and trauma from young people they work with” in Croydon.

Ian Powell, Community Outreach Manager at Tuckers Solicitors, said “these statistics are horrific, but not surprising.   Obviously, the cuts to police numbers mean that there is more and more unchecked crime on our streets.  Our biggest concern is for those young people who start carrying knives, not because they are intent on committing crime, but because they feel that they need to carry a weapon for their own protection.   The unfortunate, but inevitable, consequence of this is that we end up criminalising more and more young people – and a cycle of despair gets ever worse”.

What is classed as ‘knife crime’ and what are the consequences?

Knife crime is any crime which involves a knife, this includes:

The maximum sentence for anyone found guilty of carrying an illegal knife is 4 years. This could either be a community sentence, a fine or you could be detained in custody. If you injure anyone or use the knife against someone to commit a crime, the penalties could vary and be a lot worse.

If you are in possession of a knife that you would like to dispose of, you can see if your local police station run a knife amnesty, where you can safely dispose of the knife if it is not linked to any serious gang-related crimes. If you require expert criminal advice about knife crime, please contact Ian Powell on powelli@tuckerssolicitors.com or on 020 7388 8333. 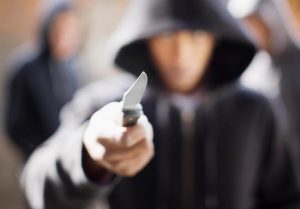