Figures relating to stop and search have just been released as part of a report of outcomes using police powers for the year ending 31 March 2017. Once again, the figures will be the source of some controversy.

The report, however, does not go into the reasons why the number has fallen. More targeted and effective use of stop and search would be positive news. However, some of the other statistics in the report suggest the reason may just be linked to dwindling police resources due to austerity cuts.

The effectiveness of Stop and Search

Only 17% of stop and searches led to an arrest, up 1 percentage point from 16% in the previous year. And controversy will continue about the disparity in the use of stop and search across ethnic groups. All figures have fallen across all ethnic groups, they have fallen at different rates. Stops of White individuals have fallen by the most (28%), while BME stops have fallen by only 11%. Individuals from BME groups remain around 4 times as likely to be stopped and searched compared the White group. Those who are Black (or Black British) are over 8 times more likely to be stopped than those who are White!

It is important that you know your rights in relation to stop and search. Tuckers have produced a leaflet which you can access here. The information is also contained in the Tuckers Solicitors Criminal app which can be downloaded from the Google Play or App Stores.

If you need any advice regarding stop and search or anything relating to criminal proceedings, please contact Adam Makepeace on makepeacea@tuckerssolicitors.com or on 020 7388 8333 to be directed to the person that can help you. 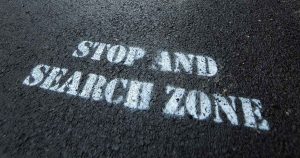