The DVLA has launched a new campaign called “ Tax it or Lose it ” which is targeting people who refuse to tax their cars. Most people think that they can get away from it, or that they won’t be found out. This is entirely wrong. The DVLA are currently checking every car in the country through their database, which includes 37 million cars’ details. The idea that they have been portraying is that if you do get caught without taxing your vehicle, it will be clamped. In order to get rid of the clamp, a fine of around £100 has to be paid. The DVLA are currently spreading the word of the campaign all over social media, mainly Twitter with the hashtag ‘#taxitorloseit’.

These are the multiple penalties that come with this offence:

Tax it or lose it – how can Tuckers help?

With a strong defence you are more likely to be able to fight the charge. If you are accused of driving without road tax, some defences include:

If you require assistance about this, we can help you. Please contact Asim Ali on alia@tuckerssolicitors.com or on 0161 233 4321 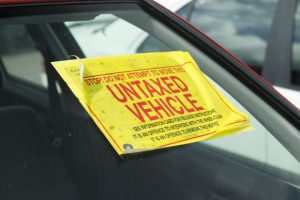