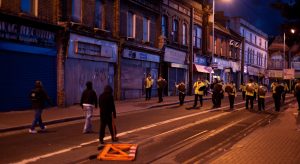 What is the matrix?

After the London riots in 2011 the Metropolitan Police put together the Gangs Matrix where they kept hold of the information of anyone considered to be a “person of interest”.

The Metropolitan Police would take actions such as looking at these persons social media posts along with looking at their previous convictions and any information passed on from local councils about them in an attempt to identify and then prosecute any potential gang members.

Once a person has been added to the list, they receive a score based on the risk that they pose.

Earlier this year the Metropolitan Police was in the spotlight over their use of the ‘gang matrix’, as it was argued that this shared information meant if you were on the list it could act against you in terms of accessibility to local services, housing and education.

Amnesty International produced a report on the matter and found that 87% of those on the list were either from black or ethnic minority communities. Stating that the matrix was racially discriminatory and in breach of human rights law.

The Metropolitan Police attempted to defend the use of the matrix by claiming they use it to offer additional support in an attempt to prevent them from re-offending.   Due to the concerns that have arisen, the Information Commissioners Office (ICO) launched an investigation.

What did the ICO investigation find?

They found numerous breaches of data protection laws. In particular, there were concerns that the gang matrix did not distinguish between offenders and victims of crime.

There had also been information that was shared inappropriately between other public bodies. As well as some instances where informal lists were kept of people who were taken off the matrix.

What action has been taken?

The Metropolitan Police have been issued with an enforcement notice by the ICO. This means in order to make sure they comply with data protection laws they were breaching now a number of procedural steps must be followed to allow the continued use of processing data through the gangs’ matrix.

What will happen now?

There have been recommendations made for ways in which policing in this area can improve such as; producing improved guidance and definitions on what constitutes a gang member, getting rid of any informal lists, and distinguishing between victims and offenders.

There is a 6 month limit for the police to meet the compliance notice made by the ICO.  A spokesman from the Met stated that the concerns that had been raised were being dealt with and they are working on way to explain the legal framework of the gangs’ matrix to the public.

To discuss anything to do with the ‘gangs matrix’ or areas of policing being put under review please contact us on 020 7388 8333 or email info@tuckerssolicitors.com and we will gladly assist.